We recently completed a college engagement campaign promoting for King & Country’s film, Priceless. The film is thriller that has the star, James (played by fK&C Joel Smallbone), caught up in the ugly world of human trafficking. We were brought onto the marketing team, lead by Bill Reeves and Laura Beth Peters of the WTA Group, to take the message of the film to college students attending school in the cities where the film was releasing. Another goal was to engage students in a movement to take a stand against human trafficking.

We approached the project from several angles including experiential marketing, screenings, social media and direct contact. The month leading up to the movie launch we visited colleges in the southeast where we set up our event in high-traffic areas on the campuses. In addition we made phone, email, and other contacts to colleges in all of the markets. 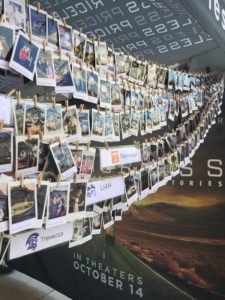 We used iPads to collect email and cell phone information from the students interested in earning more about the movement and the movie. In addition, the students participated by having Polaroid pictures taken. The photos were labels with a “#YouArePriceless” sicker. We asked that the students take a photo of their pictures and share on their social media avenue of choice including the hash tag “YouArePriceless”. As a visual representation of the movement, we attached the pictures to a cloth line around our tents with the names of the schools visible. Since many of the students had never experienced polaroid instant development photos, this brought more attention to our event.

Social media measurements and exit surveys indicated that the age group we were addressing with our campaign succeeded in getting the student involved.